“People think focus means saying yes to the thing you’ve got to focus on. But that’s not what it means at all. It means saying no to the hundred other good ideas that there are. You have to pick carefully.”

As a developer who’s started more projects than I can count, it’s good to take a look at one’s portfolio from time to time and do a bit of a spring cleaning.

BaDumChh was a daily joke texting service that I launched a few years ago. You can read about its inception here. TL;DR I was really excited about this idea for a long time and even ended up doing a relaunch after it was running for a while already.

This decision was not easy. BaDumChh was close to my heart and not only was I a user of it, but I originally built this service for myself. So why did I decide to sunset it? A few reasons:

I always strived for BaDumChh to be a self-sustaining service that could run on its own. And it was that. But without moderation of jokes, there were some days where the joke that was sent out was inappropriate, offensive, or just not funny. This wasn’t the type of quality that I wanted tied to my name.

Growth was non-existent. I had only a small handful of people on the service and that number hadn’t changed in years.

While payments were implemented and could run without intervention from myself, there were no paying users. And since this was a texting service, I was actually paying for this out of my pocket.

Needless to say, when I found myself looking ahead to the future and trying to focus on quality projects that I’d be proud to put my name on, BaDumChh didn’t make the cut.

Because BaDumChh was a live service and had many moving pieces, I had to make sure to come up with a graceful exit plan.

Using a feature I had built into the service a while back, I was able to schedule a message to all users on a certain Friday. 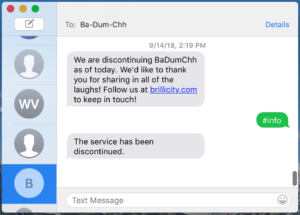 Once this message was sent out, I pushed up changes to the site that I had made ahead of time that would alert incoming users of the discontinuation of the service. These changes included:

After these were pushed up, I still had to make some updates to the environment itself. That included:

I also have a scheduled calendar notification in 1 month to release the Twilio phone numbers I used. I wanted to keep these around for a transitionary period in case someone were to reach these.

Some things that I experienced first hand from running BaDumChh:

I don’t regret creating BaDumChh. I am a big believer in learning from one’s failures and moving forward. Otherwise, I wouldn’t be where I am today, and I’d like to think I’m in a pretty good place. I absolutely love the system I created for this service, even if it will no longer see the light of day. The only personally identifiable information I kept on my servers were user’s phone numbers. The whole system ran on its own without administration (though this was eventually part of its downfall). The login process was smooth as butter. And it even ended up putting a smile on some people’s faces. But alas, the time has come to focus.